The annual output value of lock industry in our country has reached more than 60,000,000,000, among which the exports accounted for more than half. However, looking from the development quality, hardware industry including lock has obvious gaps in product quality, research, development and design ability, the construction of independent brand and marketing channel, total-factor productivity and international competitiveness. China locks enterprises should constantly enhance brand influence and the ability of independent innovation, high-end manufacturing, marketing, so as to convert China from big manufacturer to powerful manufacturer. "Since the unearthed of the first wood lock on architectures from Yangshao culture of more than 3000 years ago, lock plays an important role in building homes due to its safety protection functions. After decades of development of reform and opening-up, China lock industry which is both traditional and emerging has accelerated to the evolution of modern manufacturing. According to incomplete statistics, by the end of 2012, China lock industry has formed an annual output value of 60 billion Yuan, and China has true become the world's first superpower in making lock, said Shi Senglan in an interview, vice director of China hardware products association.

According to customs statistics, in 2012, China locks products was exported to 208 countries and regions, whose accumulative exports value reached $5.229 billion. "Locks can output 60 billion Yuan value, which thanks to the industrial transformation and upgrading, the application of modern high technology, the enterprise brand management and the growth of market demand", Shi Senglan said, the transform of traditional industries from new and high technology has an effective influence on lock industry. China lock industry has formed a comprehensive industry system, which integrates machinery, electronics, biotechnology, owns thousands kinds of design and colors, and across multiple disciplines and many industries. Besides, according to the customs statistics, in the period of "11th five-year plan", the average annual export growth of lock industry was up to 31%, which is twice of average growth rate of hardware industry.

At present, the main production bases of lock concentrate in Zhejiang, Guangdong, Shandong and other places. Products have been developed from the padlock in the past to 20 categories of more than 100 series, over 8000 varieties of designs and colors and specifications; from traditional single/double tongue locks to spherical door lock, handle door lock, electronic lock, magnetic card lock, IC card lock, car locks, motorcycle locks, fingerprint lock, digital lock, etc., and have been expanded to the developing direction of mechanical and electrical integration and intelligence, as well as functional and decorative combination, which basically formed a system of high, medium and low-grade products.

With the rapid development of housing and automobile industry, in recent years, the kinds of locks, as well as the scale and technological content are increasing constantly. For example, car lock and other traffic locks and lock products with special purposes have been constantly innovated along with the development of the upstream product; the application of electronic technology makes locks product be no longer confined to mechanical structure, but develop in the electronic and intelligent direction, and its using range has changed from families to the intelligent residential district management.

In recent years, that the transformation and upgrading changes the development mode has become the consensus in the lock industry. Lock industry emerges a batch of large enterprises with higher level size and output. According to incomplete statistics, at present the number of lock manufacturing enterprises whose production is over one hundred million Yuan has reached more than 20. In 2012, the lock sales of Yantai Sanhuan Lock Group co., LTD. have exceeded 1 billion Yuan. At the same time of rapid development in scale, locks enterprises in China start to pay attention to its brand construction and independent innovation. Advanced equipments are widely used, high and new technologies are applied to the lock manufacturing process, and the amount of products with high value-added, quality, and performance is larger. Some large locks enterprises begin to develop high-tech intelligent locks, keeping pace with the international giant, so as to occupy the high-end market. With the rapid growth of lock market demand, in recent years, a large number of foreign locks have also entered the market in our country, especially some high-end products, such as brands from the United States, Italy, France and other countries, occupy a considerable domestic market share, and the pattern of the internationalization of domestic competition is more and more obvious.

"In the future competition will still be among the brand, quality and channel, so China lock must accelerate the growth and expansion of the brand.", chairman of the China hardware products association Zhang Dongli said, " From the current trend, the development potential of high-grade locks market is very big, China locks enterprises have to continuously strengthen their brand influence and the ability of independent innovation, high-end manufacturing and marketing, enhance the consciousness of social responsibility. China has to become the internationalization of enterprises and much respected by the world brand through the production of high quality locks products in the world, so as to improve the influence and competitiveness of Chinese locks, as well as push China to shift from big manufacturer to powerful manufacturer in locks industry". 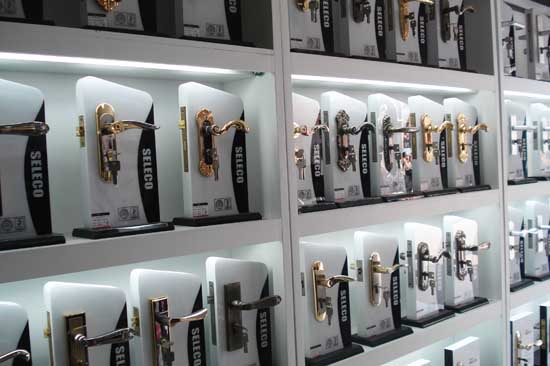 Previous: China, Korea and Germany Lead the Development of Locks