The Explanations of Various Locks

The Explanations of Various Locks

B. Furniture locks are used in home furnishings, for example, drawers, showcase, bags, and postbox and so on.

D. Special locks are suitable for some particular situations, such as prison, barnacles, fireproofing and so on.

Mortise Door Locks
Locks bodies are inserted in the stiles, while their handles plates are installed on the surfaces. They are suitable for house gates due to their high security. (They can also be used in room doors according to the situation). This kind of locks is especially fit for disabled people, including various styles such as single-bolt, monoclinic-bolt, double-bolt, multi-bolt and multi-bolt operation.

The definition of Latch Linkage: Except for accomplishing its own function, it also moves other parts by joint level or other methods such as marble mortise locks or exterior locks with double bolts.

Global Locks
The locks bodies are inserted in the stiles, while their heads and safety mechanism are inside their global handless. This type is usually applied to room doors, which has cylinder and three spheres, or cylinders and three handles. The function varies on the structure of cylinders and handles. Cylinder locks can be directly opened by keys, while the tubular locksets can only unlock but need to open by rotating the knob or lever. Cylinder locks are often domestically used, while the tubular locksets are usually used in foreign countries, including room locks, bathroom locks, passage locks, storage locks, yard/balcony locks, classroom locks, exit locks, single connection locks, double connection locks, hotel locks, single fixed head locks, double fixed locks, and lock set.

External Locks
Their bodies are installed on the surfaces of stiles, which are usually used in the external doors of buildings, houses or landing doors. They have different varieties such as single-bolt, double-bolt (or multi-bolt) and double-buckle (also called tiger locks). The former three ones usually move horizontally, while the last one moves vertically. The structures of the locks are often divided into single and double ones. Here are their differences:

1. Single Locks:
They can be opened by keys when out of the door, while by handless in the door. It has high security outside door and can easily operate inside door without keyss. So this kind is the most suitable for fire prevention or other emergency situation. One defect is that the door can be opened at any time as long as there is someone (including thieves) inside.

2. Double Locks: this kind of locks can only be opened with keys no matter inside or outside the door. It has high security than single ones. If the thieves enter without keys, they also cannot open the door. In addition, most of them have the ability to defense, which means without keyss, any common tools such as screwdriver, pinchers or hammer are not able to take the locks down. Unfortunately, in some emergency occasion (for example, fleeing a fire will be difficult), it will be less convenient than single ones; as for double-buckle (tiger) locks, due to the vertically movement of the bolt, it is often cylindrical. We often use keys or handles to move the lock bolt, so its structure can be divided into self-touch and non-touch function:

a. Self-touch function: there is a bevel on the bolt of cylinder lock, and the bolt will hook when the lock body touches the buckle. It is called self-touch where the door can be opened by keys outside, and by keys or handles to lock or open inside; there is usually a safety button in the body of this kind, which must be locked when closing the door without locking. This can disable the bevel to extend, and the door can therefore be freely opened and closed. It is impossible to open the door when you are out without keys.

Types of Door Locks
Each door has their own function, so do their locks required, and there are no more only padlocks or warded locks. According to purposes, locks can be divided into: door locks (or anti-theft locks), bedroom locks, passage locks and bathroom locks. Divided by shape, there are: global locks, handles locks, mortise locks and stayed locks. The function of the handles and ball of global locks and handles locks are integrated into one. The stayed locks can only be installed on the door where the distance between anti-theft doors and gateway are less than 80cm, and another push handles need installing.

There are mainly four kinds of common door locks:

The first kind is gate locks, which are the divide of in-home and out-homes. One of their special function is safety, so they are also been called safety or anti-theft locks. You should notice when choosing that the distance between the door and anti-theft door is less than 80cm, otherwise the anti-theft one will disable the door to close.

The second one is passage locks. They just play a role of the handles or hit of a door, which have no security function and are suitable for the door of kitchen, hall, living room, dining room and kids' room.

The third type is bathroom locks. Their characteristics are that they can be locked inside somewhere, but can only be opened by keyss when outside. So they are usually applied to rest room or bathroom.

The last one is bedroom locks, which can be insured inside the doors and opened by keyss out of the door. This kind is fit for bedrooms and balconies. 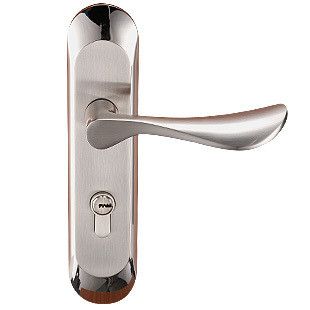 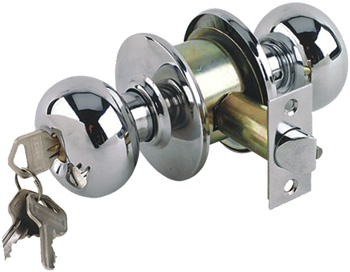 Next: Factors of Choosing Cabinet Locks and Hinges